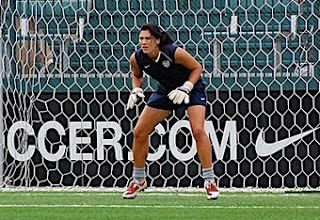 Yesterday I went to football training for the first time ever. I haven’t kicked a ball since I was about ten; back in the good old days when my brother and his friends stuck me in goal between their crumpled school jumpers and kicked balls at my face.

After letting in two million goals I normally ended up walking away with a nose bleed for my troubles.

Anyway, my initiation into women’s football didn’t start particularly well. I didn’t own a pair of suitable shorts or socks long enough to fit shin pads in… if I’d even owned a pair. I donned my best running leggings, a neutral green top and a pair of battered training from the less lazy, hazy days of my past. I hoped I wouldn’t be turning up to face a militant bunch of uniformed female football fanatics.
A friend of mine was picking me up, so at least we’d be going together, and she had only been to one training session (with a rival team, shhhh!) the week before, so we were both a bit nervous. Unfortunately, the “bear lefts” and “at the next junction turn left, right, a bit to the side and then completely back on yourself” of her sat nav took her almost to Weston Super Mare. Not only was this far from my house, it was a destination no sane person wishes to end up in at 7pm on a Wednesday night.
We made it to the training session half an hour late, which I was secretly pleased about. ‘At least there’s only half an hour left to make a fool of myself,’ I thought cheerfully to myself, before being told the session was actually an hour and a half and that as we’d missed the warm-up we were getting chucked in at the deep end.
My stomach lurched as we were separated into different groups and watched the first two girls go head-to-head while everyone watched. We were the last two up and we sprinted to the centre. 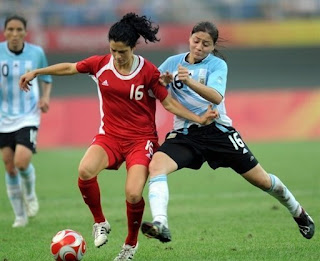 My friend got the ball and my legs (and brain) instantly turned to jelly. She almost walked the ball into the net like an absolute pro as I looked on helplessly. Her team scored and mine looked at me with a generous portion of pity and a large dollop of disappointment.
The rest of the session was intense but good. I’m still a bit scared of the ball, and of some of the other players (the very vocal ones you want to run away from as they come towards you), but it really got my heart racing and gave me a fresh appreciation of professional footballers’ work rates.I even produced one kick I was quite proud of… even though the whistle immediately went for a free kick as it was indoor five-a-side and no overhead kicks are allowed, apparently.
Anyway, the point is that sometimes it’s beneficial to face your fears and do something you’re not actually that good at. If you always live in your comfort zone, you never feel that sense of achievement that comes from pushing yourself in a new direction, getting some decent exercise, working as part of a team and meeting some pretty cool people in the process. And I didn’t get a ball in the face all evening.
Best of all, there was free pizza and chips in the pub afterwards. Suffice to say I’ll probably be returning next week… for the pub bit at least!
“For God has not given us a spirit of fear, but of power and of love and of a sound mind” (2 Tim 1:7).
Read more from Joy in the next issue of Liberti magazine.