A couple of weeks ago I was offered an interview with Justin Bieber’s mum. This had two immediate effects on me – the first was that I found myself singing that delightful “Baby” song in my head and have been trying to shift it ever since.

And I’ll be honest about my second reaction, too. Rather than jumping to a conclusion about her, I positively leapt to one: I mean, what on the earth could the mother of this teenage singing sensation have to say that could be of any real interest to me or the magazine?
I did what we all do in situations like this and googled her, expecting to find a couple of pictures of her and Justin prancing down a red carpet or too, but nothing of any real substance. I soon discovered I was wrong.
It turns out Pattie Mallette has penned a bestseller and that she is using her first-hand experience of child abuse, drug addiction and teenage pregnancy to help others. She even has her own Wikipedia page. My views on this rather beautiful young woman were starting to change.
We decided that her story would in fact be of great interest to Liberti readers and her agent swiftly shipped me a copy of her book, Nowhere but Up, which I had about two hours to read before the interview kicked off. I got started right away and was instantly moved by Pattie’s story and by the frank, honest way she told it. 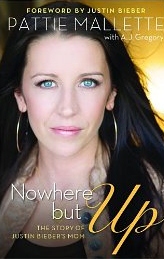 This is a woman who has been through a lot. I won’t spoil it for you, but I can pretty much guarantee it will move you; not only because of the subject matter, but because writing it down took guts and must have been painful to do. And because instead of sitting around feeling sorry for herself she is determined to use her terrible experiences to give hope to those who have been through similar things.

Now a committed Christian, Pattie shares how her relationship with God has helped her to come through some extremely tough times and how, rather than pretending they didn’t happen, she has confronted them and sought God’s healing and deliverance.
I’ll never just think of her as “Justin Bieber’s mum” again, although having a famous son has given her a good platform to share her story (and the foreword he wrote in the book is lovely). I now feel ashamed that I more or less wrote her off before I even knew anything about her.
She is brave, engaging and inspiring in equal measure and, if you’ll excuse the pun, I will endeavour never to judge a book by its cover again. I really enjoyed speaking to her and I hope you’ll enjoy reading what she had to say in the next issue of Libertimagazine (our January to March edition).
If you can’t wait that long, a whole host of other inspiring women have appeared in and written for the current issue (October to December), which focuses on ‘50 shades of freedom’.  It’s a good ’un if I do say so myself!