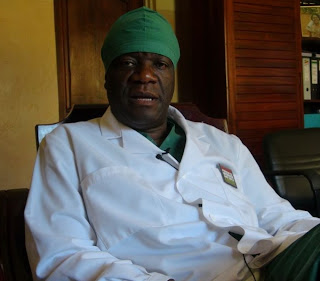 Having co-written an article on rape for the upcoming edition of Liberti, I was intrigued when I saw a BBC programme entitled The rape surgeon of DR Congo on iPlayer. The short film describes a country where women are not just raped for sexual gratification, but as a weapon of war. It was harrowing to say the least.
Gynaecologist Denis Mukwege is based in Congo and has literally risked life and limb to restore hope and bring physical healing to victims of rape in the country. “It was that year [1999] that our first rape victim was brought into the hospital. After being raped, bullets had been fired into her genitals and thighs,” Dr Mukwege recalls.
“I thought that was a barbaric act of war, but the real shock came three months later. Forty-five women came to us with the same story, they were all saying: ‘People came into my village and raped me, tortured me.’”
Since then, he and his colleagues have treated around 30,000 rape victims in DR Congo. His hospital, which has been destroyed more than once, provides around 350 beds, which are nearly full most of the time.
The sheer volume of victims crossing his threshold caused Dr Mukwege to think about what was happening: “These weren’t just violent acts of war, but part of a strategy. You had situations where multiple people were raped at the same time, publicly; a whole village might be raped during the night. In doing this, they hurt not just the victims but the whole community, which they force to watch.
“The result of this strategy is that people are forced to flee their villages, abandon their fields, their resources, everything. It’s very effective.”
Although there is no obvious way for him to put an end to the barbaric practice, he and his team take time to carry out psychological examinations on every victim and treat them accordingly. Operations are performed and long-term care is given where it is needed.
Thanks to funding from Unicef and other aid agencies, the care is free; an imperative seeing as some of the women turn up without even any clothes. They are fed, clothed and cared for, and are not discharged until they are properly back on their feet. Many are also offered legal support and advice.

No, not a bit of it. In fact, he was forced to flee his own home in 2011 after being held at gunpoint by five men and seeing one of his guards shot dead in front of him. It was a miracle he survived the gunfire that ensued, and that the men left with his car and nothing else. His daughters had also been threatened by the armed men, who had broken into the family home, but were unharmed.
He and the family fled to Europe but he recently returned to his homeland at the request of a group of local women who are campaigning against these atrocities and putting their lives on the line in the process. Earning practically nothing themselves, they managed to save enough to fly Dr Mukwege back to Congo and have been offering him round-the-clock protection ever since.
The women welcomed him back to the country as if he were the greatest hero of their time… and he just might be.
It inspired me to hear that one man has risked so much to help the many women who have suffered this terrible crime and, ultimately, to join with these female campaigners in working to put an end to the horrific ‘war tactic’ once and for all.
Let’s pray for his continued safety and for peace in Congo; for healing for the women who have been damaged physically and psychologically; and that justice will catch up with the perpetrators of this evil.
Read more from Joy in the next issue of Liberti.

One Response to “A rare hero in the rape arena”